His motives are frightening because they are pure: He has the scary sincerity of the unhinged whose delusions armor them against evidence.

Will, George. “Opinion | Why Mastriano’s candidacy presents a special danger to the nation.” The Washington Post. September 23, 2022. Accessed September 30, 2022. https://www.washingtonpost.com/opinions/2022/09/25/mastriano-danger-pennsylvania-governor/.

I am not sure why Hazel Scott was never on my radar, but today’s Candorville comic let me know about her. Scott was a virtuosa classical and jazz pianist (YouTube) who also fought for civil rights and against McCarthyism (Wikipedia).

“Speak, thou vast and venerable head,” muttered Ahab, “which, though ungarnished with a beard, yet here and there lookest hoary with mosses; speak, mighty head, and tell us the secret thing that is in thee. Of all divers, thou has dived the deepest. That head upon which the upper sun now gleams has moved amid the world’s foundations. Where unrecorded names and navies rust, and untold hopes and anchors rot; where in her murderous hold this frigate earth is ballasted with bones of millions of the drowned; there, in that awful water-land, there was thy most familiar home. Thou hast been where bell or diver never went; has slept by many a sailer’s side, where sleepless mothers would give their lives to lay them down. Thou saw’st the locked lovers when leaping from their flaming ship; heart to heart they sank beneath the exulting wave; true to each other, when heaven seemed false to them. Thou saw’st the murdered mate when tossed by pirates from the midnight deck; for hours he fell into the deeper midnight of the insatiate maw; and his murderers still sailed on unharmed — while swift lightnings shivered the neighboring ship that would have borne a righteous husband to outstretched, longing arms. O head! thou has seen enough to split the planets and make an infidel of Abraham, and not one syllable is thine!”

PLURAL NOUN
archaic, informal
Handcuffs.
‘The quality of their handcuffs is quite close to darbies that have been made in Great Britain – the fine workmanship differs significantly from the crude stuff that comes from India.’

Ultimo means last month. Together with instant (the current month) and proximo (next month) it’s an example of an outdated commercial language.

Few businessmen would today begin a letter “With reference to yours of the 14th ultimo”, or “yours of the 23rd instant”, or “Please attend this office for interview on the 11th proximo”, but it was once standard and taught in the best books.

‘This removes all unnecessary cruft from Word documents saved as HTML’

Whoever he was, he was dead now, and it turned out he probably wouldn’t have been an open casket job even if he’d reached his natural expiration date. In fact, looking at him, he’d clearly been in the process of hurrying that along.

A tapering or projecting stern section of a vessel’s keel, which protects the propeller and supports the rudder.

A stanza of Poe’s “Annabel Lee,” representative of meter, word choice, and repetition for effect. See the link it its citation for the full poem.

But our love it was stronger by far than the love
Of those who were older than we—
Of many far wiser than we—
And neither the angels in Heaven above
Nor the demons down under the sea
Can ever dissever my soul from the soul
Of the beautiful Annabel Lee;

Most deceptive of all – indeed probably holding the record for animals not looking remotely like the thing that zoologists know them to be – are the parasitic barnacles, such as Sacculina. Sacculina is not what it seems with a vengeance. Zoologists would never have realised that it is in fact a barnacle, but for its larva. The adult is a soft sac that clings to the underside of a crab and sends long, branching, plant-like roots inside to absorb nourishment from the crab’s tissues. The parasite not only doesn’t look like a barnacle, it doesn’t look like a crustacean of any kind. It has completely lost all trace of the armour plating, and all trace of the bodily segmentation that nearly all other arthropods have. It might as well be a parasitic plant or fungus. Yet, in terms of its evolutionary relationships, it is a crustacian, and not just a crustacean but specifically a barnacle. Barnacles are indeed not what they seem.

And it gets even better….

By the way, Sacculina‘s branching root system is not indiscriminate in its invasion of the crab’s tissues. It heads first for the crab’s reproductive organs, which has the effect of castrating the crab. Is this just an accidental by-product? Probably not. Castration not only sterilises the crab. Like a fat bullock, the castrated crab, instead of concentrating on becoming a lean, mean, reproducing machine, diverts resources towards getting larger: more food for the parasite.

Richard Dawkins. The ancestor’s tale : a pilgrimage to the dawn of evolution (Boston: Houghton Mifflin, 2004), 434-35

In action (from Hans Hillewaert, via Wikimedia Commons): 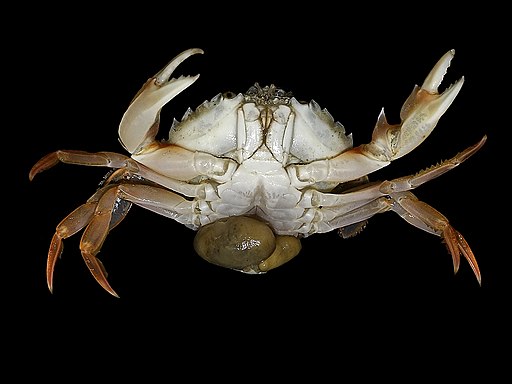